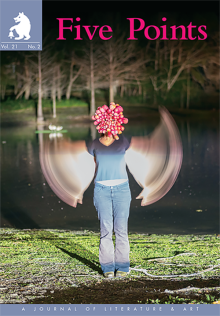 Imagine as you spoke you were thoughtful and kind and never erred. Not a curse, uh, lisp, stutter,
ahem, or imperfect expression. I have wished for this—my entire body under control, no giveaway
frown, eye roll, sigh through the nose, impatient tap of the right foot as if like a horse I were wearing
a bit. Would you be moved by such discipline? Would you show the utmost respect?

Behold the ships, those dead weight monoliths on land, yet seemingly easy by sea despite the fierce
winds. They are guided by the will of a pilot, small dials, toggle switches, and due attention to
weather reports, and guidance from the home port.

At the age of ten I was impatient, demanding my turn at the wheel. And, lo the teacher granted my
wish to be captain of the safety patrol, which included the blue badge and the gleaming white belt
across my chest. Captain of the corner at P and 34th Street, where I called all the children to order,
and verily they obeyed—The tongue is a small member, yet it boasts of great exploits, cautioned James.

One girl ignored my command which, in the parlance of our office, sounded like let’s go, let’s go, let’s
go. She refused to cross the street. She stood fast, in her thick lenses and bubble-gum pink frames.
James noted, from the faucet comes either saltwater or fresh. From the mouth, both curse and blessing. I
called her stupid, lazybones, dork. I could have been a follower of Mengele as I pinched the pudge
of her back and pushed her into traffic toward the other side of the street.

An error of the most despicable sort! Would my life have been different if my parents had held back
their disapproval? They did not. My father called me reckless. I told my mother I didn’t mean it and
she wouldn’t believe me. I’m sorry, I said, and she replied, Guilt is good. Apologize to the girl and her
mother. The match was lit.

There are times when the tongue is a fire, fueled by a mouthful of words. A whole body can burn.