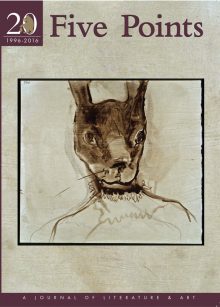 “Emergencies,” my father says, brown eyes sage, silver in his beard and close cropped hair. He extends one frail hundred. Ben Franklin slumps as if he needs to rediscover electricity to stay awake. “Your great-grandfather’s,” my father says.

“Cool.” Aaron pockets his phone, reaches for the bill. The touch of money is foreign to him. What does he need that I don’t buy?

Six decades separate my father from Aaron. We both want him to believe it’s a different century than the one that molded us. Yet even here in the suburbs, a boy of mixed race—an quadroon, by the old system—needs to look up from the phone more often, see what’s coming.

My father pockets his wallet. “Keep it,” he says to Aaron.

The hundred, browned by age, trembles in Aaron’s hand. “For real?” He looks at his grandfather, who nods again. Now, ankles creaking, we follow Aaron to his room, where he seeks among the relics of eleven years a home for this bill, unspent these fifty years.

I stop outside the bedroom. I don’t want to know where Aaron keeps the bill. Its powers were always too many for me to handle. I would have tossed it away on the first bar tab, eager to prove its worth.