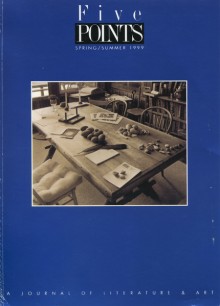 From Frederick Busch, “I think a story tends to take a moment out of time and preserve it. It’s the moment at which either the reader and/or the characters or a character sees a truth about themselves, or feels a truthful feeling about the character.”

All that year, our toilet was broken. You had to kneel down to adjust the water pressure and the men at our various parties went out to pee in the backyard instead. I never went back there myself because the landlord rarely got around to mowing and I didn’t want to know anyway. I imagined: wild mint and stinkweed, box elder bugs and raccoons, a couple pairs of bikini underwear Sonia had spread out over a bush to dry, and a naked female figure stretching her arms up toward the collapsed clothesline—the Goddess in her domestic guise. Sonia had been courting Her ever since the second abortion and the attendant short course in matriarchal religions. When in doubt, my new housemate consulted a series of colorful paperbacks, a herbal remedy recipe book, and a round deck of soft focus, water color tarot cards for guidance and instruction. And after I moved into the back bedroom with the warped wooden floor and the smell of insecticide and ginger root in the corners, I was expected to do the same.