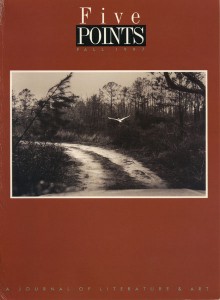 Rodney Jones
Going to School in a Dry County

From the bootleggers’ shanty at Round Top
To the swing sets in the Falkville schoolyard
The road went underwater, which made
Our labyrinthine bus rides through the bottoms

Dead ringers for those geography tests
When I’d wonder if I’d studied enough,
Guessing the brain’s good dog might send up
Utah when I’d sent down for Nevada;

Though also this was the biblical road,
Flood-fleshed with bedwettings and cold sweat.
It clarified distinctions between tests:
Fake true-or-false was wilting mimeograph;

Real true-or-false was marked on the rail
Where a neighbor girl, drunk after a dance,
Had flunked the bridge and fueled a sermon.
Nevertheless, if the bus lurched, then stalled,

I held my mother’s optimism—
Dead chickens and barn boards floated by—
Nature’s gold was everywhere if you knew
Where to look. All roads led to stars—

And while the engine turned, some prayed,
Some leapt up jeering, who would be chastised
Mildly and then forgiven. Most tolerant of men,
Fred Jenkins, the shell-shocked veteran, drove.