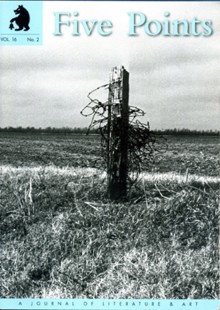 She was deep in mint. Wild stuff, it had swamped the lavender and chives and thyme already. There was nothing to do but to dig it out.

A movement at the edge of the property where it fell into the old sinkhole: jackrabbit, she thought, or hawk. She peered, hand to forehead. After a moment, she saw his face among the palmettos. Clear and pale. Her son. Younger than he’d been when he left. Pale head atop a skinny neck, rugby shirt she’d bought him in junior high.

Her son was looking at her from the woods. She meant to call out to him, but her tongue had become a leaden thing. Now a delicious lightness was overwhelming her, rising from the knees up.

“Nap?” her husband was saying, pulling her to sitting. She opened her eyes. “A nap? I wait for lunch for an hour, only to find you napping in the greenery? Just snoozing in the sun? Nevermind that you talked about BLTs this morning. All this time I was fixing the birdfeeder, I was dreaming about a BLT and I had to make do with crackers and peanut butter. Not to mention the fright. Thought you were dead. And then when I saw you breathing I was sure you’d had a stroke. Be this drooling, pooping mess on my hands. Adult diapers! I almost had a heart attack just to get it over with. Then you let out a big, fat snore. While your husband waits for you and starves.”

“Out for a while, by that burn on your chin. Going to blister. Sleeping Beauty with her red chinny-chin. Going to smart in the shower. Time and a place for everything, wife of mine. Naps at noon offend the natural order of things.”

“I saw—” she began, but heard how it sounded in her head and stopped.

“You saw, you saw,” he said. “What? You dreamt. Whatever it was that is giving you that squirrelly look. You dreamt it. Nightmare. Napmare, rather. Ha!”

They came up the terraces, the roses sparkling under the sprinkler she’d neglected to turn off. The grass was squishy, though Florida had been in a hard drought for months.

“I’ll make you a sandwich,” she said.

“Bah,” he said, disgusted, but when she brought him the plate, barbecue chips on the side to appease, he didn’t leave a crumb.

A million times she could have said, Husband, I saw our boy. In the woods and about to talk to me, though he’d just called the day before from Kabul. But she didn’t. He didn’t give her enough space. Her husband dogged her as she cleaned the toilets, made the eggs for them in the morning.

“Why are you squinting and blinking like that?” he said. “Give me your glasses, I’ll wipe them.” And then the mush of the world as he picked the glasses off her face, she helpless as a slug.

“Why are you looking out the window at the woods?” he said. “Jeepers, woman, give it a rest.”

Grumble, mumble, half-voiced plaints, all day from wake to snore. She didn’t mind. Poor man. Last thing he needed on his suspension from the fish and wildlife service is a wife who swoons, who sees things. She kept what she saw to herself. And only when he was shouting at the television as if it too had ears to hear, did she let her eyes drift back to the dark line of the woods.