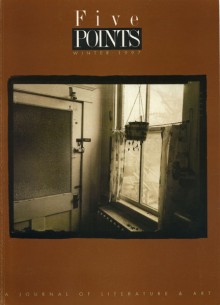 About the size of yours,
hauled in from the country, orange, new,
carved by you into a caricature
of your worst best moods, a spike-toothed mime,
grinning or scowling—which, I never knew—
set out on the porch one morning in October.
The first night, we lit a candle in it
and felt that primitive thrill—heat, light—
reflected in our locked eyes that could not swerve apart,
the head’s expression shocked, apocalyptic.
That foolish night blackened the underside,
then frost and sunlight slowly began
to wear it down, wear it away, so that after a week
we could see the change, the skin,
once firm and smooth, grew soft and slack,
a gray-green fur took over, and hair began to sprout
in soft tufts on the crown even as the jaw collapsed and fell
into the empty space where vegetable brains had been.
The effect was all too human.

And through it all, the days grew, shorter, sharper.
Leaves fell, first just a few, then more, until the yard
was full to brimming with the waste of the year.
We raked and argued, our words loud
in the empty air, so that the neighbors heard,
and the child cried, and the back door slammed
on our angry exits, sleep impossible to come by.
And through it all, the head out there in the dark,
keeping its thoughts to itself, its toothy grin macabre.
Sometimes I stared into its black decrepitude
until I felt heart and mind collapsing into
a sludge of spirit. It was like staring into a grave.

By the end of the month, its soul,
or what was left of it, had oozed out
onto the floor. I was shocked at the smell.
Coming back one night, I saw, surprised,
it was gone. Thrown out. Like that.
A trapezoid of light from the kitchen
shone on the vacant spot, all mopped up.
Inside, your shadowy figure moved in blurred pantomime,
the windows steamed from the cookpots.
You were stirring and stirring something.
I stood there, feeling the fall,
the cold, the loss, the utter waste of it all.
The air was raw, with an edge of winter in it.
I stood there, shivering, desolate,
and then, went in.