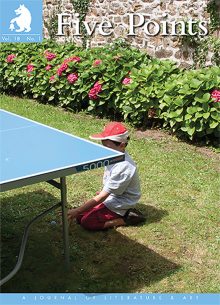 I was broken apart, scattered in the woods. There was an axe, there was a cry, and then everything was cold. A hawk took two fingers and flew away. The cold was seeping into what was left of me. I knew I must gather myself together or I would disappear. I would be grass and weeds. I would be taken up by the wind. I wasn’t ready for that. There was something I had yet to do. Luckily, I had a needle and black string in my pocket. I sewed myself back together, minus the fingers. I didn’t believe in revenge until the moment when the ax was raised against me. I didn’t know how hot my blood would be. Now it was burning. When I was together again I was a flame.

I followed the path back into the city. There was a trail of tears I myself had cried. Each one had burned through the grass. I went into the entryway of the hall that was made of white stones. The stones could speak if you asked the right question. I asked Why? and the stones were silent. I asked Why not? and they answered. Go forward.

The man who killed me was at a long table, drinking something that would allow him to dismiss me as ghost. But I wasn’t. I was the woman who had been in his bed, built his house, given birth to his children, baked his bread. But I was ugly. No one wanted to look at me, so how could he be blamed for what he did? He was rid of me, and on to the next.

I had always worn a hood so that people wouldn’t laugh or run away. Not anymore. The hood was torn apart and became bright thread used for birds’ nests. Because I had stitched myself together and was designed by my own hand I didn’t have to look in a mirror to know I was beautiful. But being so meant nothing to me, only that I could walk into the hall where he was and not have people know me for who I once was. I was the woman who was foolish enough to follow him into the woods when he told me he had a secret to tell me. The secret had no words, of course. I had to be shown. It should have been simple, but when he left me there, I refused to die.

He was the same, yet different. To be honest, so was I. Black thread is strong, it doesn’t break, it’s invisible to the naked eye, it’s not as tragic as flesh. It made me into everything I had to be. People say look away, forgive, but that is difficult to do when your eyes have rolled into the tall grass. They say turn the other cheek, but when you are sliced into pieces, that is no longer possible. There is only one path. On that path you must gather together those things other people would consider broken bits. A hand, an eye, a heart. Put them in a basket and carry them home. Once you do you’ll know how vengeance feels: like a hawk in the sky with two fingers in its beak, like a wave that can only go forward, like the terror of someone who knows there aren’t any ghosts, only a woman who returns, who sews herself together with black thread, who knows where the axe is kept.