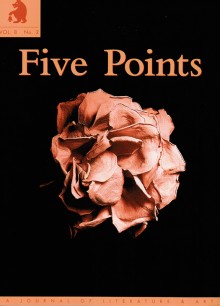 Lucyna Prostko
Landscape After the War

The earth opened its mouth like a snake—
the song of locust poured toward the sea.

We must be silent, there are things one doesn’t
tell in a village mined with passion, scorched to fear.

His mouth doesn’t tremble when he shows us
the numb “trunkless legs” of buildings, sometimes

only the pathway of a foundation, stone
glazed by the smoke, the lake of ash where

olive groves covered the hill. “The artillery
was heavy,” he says looking toward the Vielebit

Mountain, away from the site. The moon glides
against the sun, whose red disheveled head

slips behind us. I think of women in black,
slicing watermelons at dinnertime, pouring wine

the scent of a pomegranate; of women, kneeling
in an old church where frescoes weep into the stone;

I could’ve been one of them, and even you
could turn if you were here. Even you, who I swear

I know better than myself, could talk harshly, send me
for pitchers of wine, as if they could transfuse

blood back into veins. I look at you,
as if you were made of glass—I see one self who dies,

on the hot skin of the mountain, his skull opens into the earth, a secret
spring eyes wide to nothingness.

I see a self who kills, perhaps even his best friend
over a game of cards, because he cheated and your

hand is quicker. And maybe there is even a self—
the unmentionable one—who bruises one woman’s arm,

slides between her legs because she speaks a different
language, because the men of her tribe killed your daughter,

because her god and your god are numb and deaf as a church before sunrise.
I don’t want to think about the possibility of evil,

the opportunity to drink the blackened song of death,
to die in one’s sleep, a hundred years old, a shriveled

statue to life, away from the heat of time; somewhere
perfect, California, somewhere at the edge

The earth opened its mouth like a snake.
The war makes a man. We sing and drink, our host

shows us his house; the fisherman’s net spread
against the wall, starfish and seahorses caught

in its folds, dry and still; on the other wall,
I notice a wooden cross the size of a door.

In the photos he shares with us
he embraces a general and a priest, “This was a war

where simple men became generals.” The earth
had spoken. He answered its call. He had died

in winter, and then returned in two weeks,
miraculous as Jesus with a metal plate in his head.

Who understands the language of the earth? Even the swallow
who weaved his nest in the hole ripped by the tank,

flies in circles around our table and the dusk falls
happily, as a blindfold.