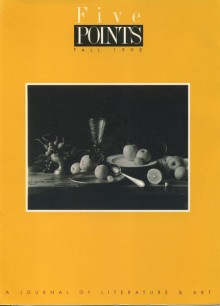 From Ellen Bryant Voigt: “We have a huge appetite for order; that’s part of the human animal. We love form of any kind. We just want it, and we want it to continue.”

Thus the physical event and the content of the
human mind were inseparable.
—Harold J. Morowitz, “Rediscovering the Mind”

What do they want from each other,
that man and woman clinging together and staggering
around the kitchen, the man’s tongue completely
inside her mouth, her breasts flattened against
his chest, what is it they can’t seem to

get to, why do they look to me like two
people roped together and thrown overboard,
sinking and thrashing in the stove’s light?
What makes them so desperate
when they’re only kissing, really only

a memory of kissing, why do I think of them and feel
my lungs burning, my heart filling with water?
I want them to break free of each other and reach
the surface again, or else I want them
to hurry up, I want them to drown. But they go on

and on until I’m exhausted, until I lie down
and finally stop caring. I’m sealing them into a box
like in the paradox that scientist proposed—
Schrodinger’s cat, that as long as you don’t look
might be alive or dead. I’m putting them in there

with the imaginary jar of poison,
the hypothetical hammer, with their letters
and little gifts, the photographs that say
they’re happy, and I’m not going to look anymore,
I’m not going to kill them or save them.