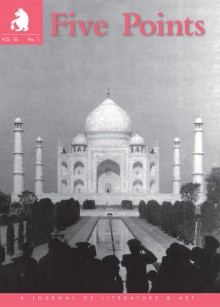 As oil blisters in the cast iron pan, my dog does
adoring prostrations at my feet and the pale pink chops
with their arc of rib and ribbon of fat lie innocently
on the white bone china we bought at Macy’s
when Janet asked the salesclerk what kind of bones
the dishes were made from and the woman confessed
she had no idea, though surely they were crushed
from sorrowful creatures. Everything you do will cause
harm, so I start forgiving myself now. But this
pig was a happy pig and his death, though death, was
a good death. I’ve boiled up his vertebrae, femurs
and fibulae, his head and his hocks
and now the stock is cooling, the creamy lard rising
to the top like a thick slab of heaven. When these
choice cuts hit the skillet, the hiss and spit is
a lullaby that’s soothed homo sapiens
since the discovery of fire. And lured the dogs
into the circle, shoulders hunched toward the flames.
As meat sears and butter bubbles,
I’m carried back to a time when this scent
meant survival—we’d see
another day. That deep craving for grease
that’s stuffed into every cell of our bodies,
that sizzling smell that tells us
all will be well, we’ll be fat enough to release
an egg, to suckle a baby. With all its
murder and mayhem, life will go on.