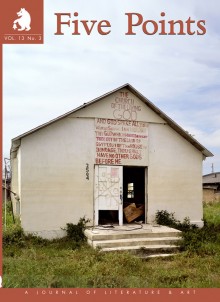 Wilson does not sing simple songs. This woman is reading from something, it is a thick official document, an assessment, she calls it, but the tone is judgmental, accusatory. An indictment is what it is. Her name is Ms. Biondi. She is a therapist, a clinician, her name followed by a long series of initials, unimaginable degrees. She reads quickly, relentlessly, without affect, measuring his son’s deficiencies on various hyphenated scales, delays measured in percentages and calculated to the second decimal. The boy is four years old and slow to speak; he’s sometimes difficult to understand. But as Ms. Biondi reports the results of her testing, the problem is more complex, more vast. She recites a long litany of ordinary milestones not met—cognitive, social, syntactic—accomplishments not achieved, but just that one sticks, worms its way into his consciousness where it sticks like a fishhook in his heart. Wilson does not sing simple songs.

Fred had foolishly imagined something else entirely, a different kind of proceeding altogether, something cooperative and supportive, sympathetic, possibly therapeutic, chairs pulled together in a semicircle, Styrofoam cups of coffee, knees almost touching. But when Fred explains that his wife will not be able to attend, that she is in the hospital, the response is so muted, he feels as if he’s breached decorum somehow, been inappropriately personal, offered too much information.
In fact, this seems like some sort of quasi-legal procedure, six or seven people with titles arranged behind a long table. Somebody from the school district, a parent representative, the coordinator of special education, a small squadron of therapists. They have nameplates, reading glasses, thick stacks of file in duplicates, water glasses. It’s like a senate hearing.

They’d done the tests—a battery of them, they called them, administered a day-long beating—two weeks before at Children’s, spent the better part of a day moving from department to department, from office to office. It was hot and the air conditioning was on the blink. There were doors and windows propped open with books and brooms, the receptionists all sweaty and fanning themselves with manila file folders. The tests were administered in rooms the size of broom closets, all by different specialists, each of them abrupt, professionally cheerful in a too-loud, vaguely menacing way. If you got in Wilson’s face right away, demanded to shake hands and peppered him with questions, he shrank, hid, buried himself behind his father’s legs. He performed part of what seemed to be some sort of I.Q. test from beneath a chair, reaching out gamely to match shapes and colors, his little knuckles dimpled with baby fat. Fred should have put an end to it then. There were more tests, but Wilson had had enough. There was some coaxing, then bribes, finally threats. Eventually, flushed with the heat and utter frustration, Wilson kicked a chair.

“Such anger,” the psychologist said. “Where is that coming from?” she asked Fred. The implication seemed to be that it was coming from him somehow, that he must be the chair-throwing type. He’s not; he’s pacific, probably to a fault. He retrieved the chair and apologized on Wilson’s behalf, but deep down he more than understood, he cheered—under the circumstances, throwing a chair struck him as a deeply honest, utterly sane response, the definitive right answer.