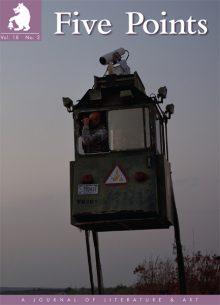 The gift arrived during supper. He told the children it could wait on the porch, and they stole looks out the window, glumly chewing chicken and potatoes. The mother disapproved of his tone or his verdict or both. She conveyed this by bowing her head until her own plate was clear. He conveyed his apathy by questioning the children about their school days.

Afterward, the fight was waiting out there. He took the girl along, she being the older and more recently privileged-deprived and the by being in need of a bath and howling about rashes created by that need. A heavily bruised moon peered over the pines. Bats turned blurred circles in the twilight, being plentiful here as the disease killing them elsewhere was still on its way. . . .