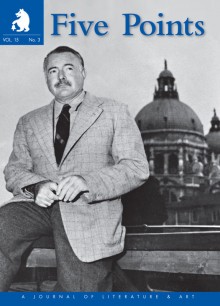 Lydia Davis
The Magic of the Train

We can see by the way they look from behind, as we watch them walk away from us down the train car, past the open doors of the toilets, through the sliding doors at the end, into some other part of the train, we can tell by the backs of them, these two young women, in their tight black jeans, their platform heels, their tight sweaters and jean jackets in fashionable layers, their ample loose long black hair, the way they stride along, that they’re in their late teens or more likely their early twenties. But when they come back the other way towards up, after a little while, from their excursion through the train, to some strange and magical part of it up ahead, when they come back, still striding along, we can now see their faces, pale, haggard, with violet shadows under their eyes, odd moles here and there, laugh lines, frown lines, sagging cheeks, though they are smiling a little, gently, and we see that in the meantime, under the magical effect of the train, they have aged twenty years.