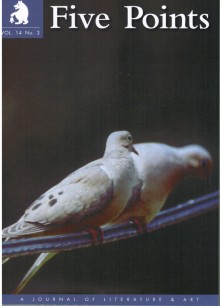 From A. E. Stallings, “It is ultimately a brash act to write down your words for posterity. You have to have a healthy ego, I think, to dare to create.”

The dirt road was narrow and the way it rose erratically warned of a hill much steeper than the reality. The wild foliage along the shoulder, seldom attended to, brushed against the few passing cars.

Petr Kopecky stood at the top of the hill and watched the two women pull in. they had missed the dirt road on the first pass even though Lenka, the driver and anxious tour guide, was pressed close to the windshield to sharpen her vigilance. She had fretted in this posture for almost two hours; such startled draping over the steering wheel signaled something ominous or wonderful immediately on the horizon. It had caused ticks of adrenaline in Brenda who was now completely enervated by her role as passenger.

They retraced their route and found the dirt fork. It was no surprise that Lenka wasn’t the kind of driver who would be attempting to guide the car up the dodgy path. They pulled into the scrappy turnout at the bottom of the hill. Lenka was slow to satisfy herself about the car’s security as they unloaded. She stood and gazed at it as if giving the old Škoda a benediction or, more realistically, last rites, an impression reinforced by the caresses she gave the silver cross shining at her throat. Lenka was frail; prominent in her hands and bosom were dainty bones, the kind—Brenda imagined—that were bleached lighter than air.