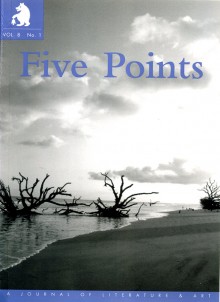 Ginger Walker
By the Sea

Seven years in Vermont and New Hampshire, always measuring the distance in hours from the seacoast, and wondering if people in Minnesota or North Dakota got claustrophobia. Emancipated at age sixteen, a kick out of the house certified by the state.

Try explaining at eighteen how you didn’t go to high school. How you can find details of whaling interspaced in Moby Dick both ridiculous and fascinating and perhaps the first taste of Post-Modernism’s gimmicks—the stuff of Vonnegut and Laurie Anderson and all them—and that you’ve read Ulysses twice on your own accord but can’t take even a remedial class at North Shore Community College without that certain piece of paper.

The man in the fishscale-removing section of the Oceancrest plant holds Alex’s application in a grubby, square-shaped hand. His brows are dark and low, his forehead creased as he inspects the form, the graph of blocks in a row for each letter of name, address, social-security number.

“Well,” says the man, “we’ll give you a call.” He coughs a little, and his face softens, his voice softens. “’Bout filled up now, but we’ll be hiring come summer. Soon as it starts getting hot out, there’ll be openings.”

March. The thaw; jacket weather. On his way home Alex stops at the Portuguese bakery and buys a loaf of Portuguese sweetbread. Used to be Portuguese gangs and Italian gangs of kids would go around beating each other up and spraying graffiti all over the huge beach rocks at Stagefort Park. Nowadays the town is diversifying, more Latinos and even blacks moving into the area, and kids are learning to get along with each other.

Alex lives in someone’s attic, a place dusty and grey-wood paneled, with a low ceiling. He doesn’t know who owns the house; whoever lives beneath him keeps long and noisy hours, drinks beer and throws the cans out the window into a cushion of pine needles two stories below.