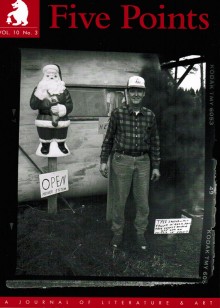 Michael Griffith
What Kind of a God Are You?

They’re questions one can imagine many a disgruntled fictional character posing to his or her creator-tormentor: What are you doing? Why me? And finally, What Kind of a God Are You?
Take poor Gregor Samsa, for instance—transformed into a “monstrous vermin,” in particular a beetle. Perhaps he could have suffered the fate with equanimity, in the short term. In fact, it takes several paragraphs before annoyance overpowers curiosity and Gregor’s mind returns to its old grooves, its wonted worries: sample cases, train schedules, the grumpy chef de bureau and his spies. Extra legs have at least novelty value—as Gregor quickly discovers, it’s easy to reach itches, even if those itches themselves are new and uncanny. But did Kafka have to set Gregor on his back, unable to flip over and return to the sleep that might rescue him from this hazy dream of insectdom? His mantle is pinned to the bedsheets, his vulnerable nethers exposed—doubly exposed, since the quilt keeps sliding off the thick surface of Gregor’s “domelike brown belly.” He tries to roll “at least a hundred times” before abandoning hope, and surely that stolid, indomitable patience is, too, an author’s curse; wouldn’t twenty have sufficed, even ten? But no—Gregor doesn’t stop until he’s rocked and failed fully five score times, until he begins “to feel in his side a faint dull ache he had never experienced before.”
The miseries keep accumulating. Did Kafka have to let the chambermaid at him with her flailing broom? Is it overkill to have Gregor’s father raid “the bowl on the sideboard” and fling apples—especially that final fruit, the one that pierces his son’s carapace (oh, poignant word) and lodges painfully in his back? And how is Gregor to bear hearing Kafka read the novella aloud to his friends, the lot of them howling with laughter? Mightn’t the word “vermin” in that famous opening sentence chime, in his ear, as gratuitous?