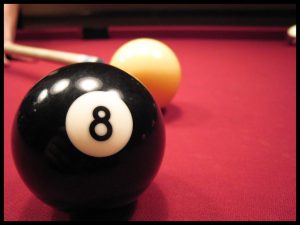 Death, a natural human experience, will eventually claim us. For those of you who have not experienced the agony of losing someone, you may have felt helpless when trying to comfort someone dealing with grief. Your brain short circuits, and you’re afraid you’ll say something asinine. You say, “It’ll get easier,” even though that person’s life is irrevocably changed.

Beth Ann Fennelly‘s essay “Bad Break,” first published in Five Points Vol. 17 , number. 2, is heart-breaking in its brevity. The essay opens with Beth preparing to play pool in a biker bar. The atmosphere in the bar changes when her opponent, Pete, reveals that a fellow biker recently died in an accident. The atmosphere changes even more when Pete reveals that the recently deceased was his father. What follows is a brief encounter that ends with Beth losing the game.

What makes this essay so heart-breaking is the way in which Pete reveals that the victim was his father. When Beth asks if the victim was his friend, he says no and then follows up with the fact that the man was his father. We don’t get much information concerning his relationship, which leads the reader to believe that Pete and his father had a strained relationship. One might take Pete’s matter-of-fact tone as a sign that he doesn’t care. However, this essay forces the reader to recognize that every person deals with grief differently. Some try to act as if nothing has changed, while others fail to bathe for weeks.

This essay also forces the reader to understand the helplessness one feels when trying to comfort someone. Even if that person is your friend struggling with the death of a family member, it’s natural to feel powerless. “I’d have lost anyway—did I mention he’d brought his own cue?—but at least now I had an excuse. Imagine telling someone that right before they break.” The last line of the essay perfectly encapsulates that feeling of helplessness and shock.

“Bad Break” weaves the significance of loss with the normalcy of a game of billiards to create an essay that resonates with the reader long after they are finished reading. Fennelly forces the reader to confront the looming presence of death, how death affects the individual, and the insignificance of words when trying to staunch pain. As someone who recently lost someone, words lack the power to relieve the pain. People try to help by offering simple statements like “It’ll get better,” but there’s nothing anyone can say that will ever take away that pain. This essay doesn’t try to feign optimism. Fennelly forces the reader to understand that sometimes a lack of words is sufficient enough.

Tiffany Pollock is studying English with a concentration in Creative Writing at Georgia State University.