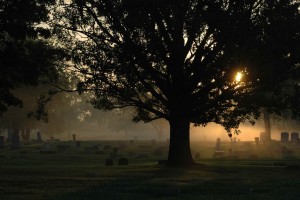 What is it you like about morning? The freshness of the leaves under the golden glow? The odd, indefinable scent of the waking woods? The crisp coolness of the air as it brushes your skin to say hello? For me, it’s the certain stillness that only mornings can have, when everything but me seems to move a little slower, as though it’s a special time the earth has made for me alone.

In his free verse poem, “Time To Go,” found in the tenth anniversary edition of Five Points Vol. 10, No. 1&2, Robert Bly prompts us to identify what makes our mornings unique to us. Though he considers what makes mornings special to others, he gives less direct attention to his own mornings. Almost as an afterthought, however, he says, “There’s a feeling of safety. That’s morning too.”

On this morning though, does the feeling of safety still prevail? Is that sense more or less profound today? Because it is time to go to a funeral. Mornings mean new beginnings; funerals mean recent endings. Whose funeral it is—colleague, friend, or family—is not stated, though Bly’s choice to not depart from the in-home setting leads me to believe it is someone from the household. Is that why he focuses on safety and the sounds of his children waking, or is the reason wholly different?

Like all art, and perhaps more than most, “Time To Go” is open to interpretation. Just like our beloved mornings, something special in Bly’s work will resonate with you.