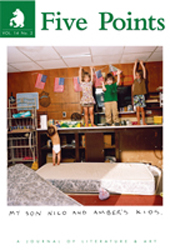 If you haven’t yet picked up a copy of Five Points 14.2, here’s a little tidbit that might sway your choice: the issue includes a brand new poem by Billy Collins, former Poet Laureate of the United States! The poem is titled “To My Favorite 17-Year-Old American High School Girl” and Five Points 14.2 is the only current locale you can find this little gem. Mr. Collins has also been reciting this poem at recent readings, including those at Emory University in Atlanta and Middlebury College in Vermont. The Middlebury College website includes an article discussing his reading, and it even mentions the new poem:

“In keeping with the spirit of Fall Family Weekend, Collins read, “To My Favorite 17-year-Old American high school girl,” sardonically lamenting the lack of achievement of the speaker’s daughter at the age of 17 by comparing the achievements of Joan of Arc, Judy Garland and Lady Jane Grey, historically accomplished youths, to her penchants of playing with her food and twirling her hair.

Collins delved further into the world of female adolescence in the brief punchy, poem, “Oh My God,” before starting to explore the world of younger children. He prefaced his poem “Lanyard” with his own camp memories, noting the incredible attitude of childhood that allowed camp goer to truly believe a homemade lanyard is an adequate thank-you for years of doting motherhood.

Collins’s poems have a deceptively simple narrative style and clean imagery; they are entertaining first reads as well engaging puzzles you can revisit.”

The article also mentions Collins reading the poem “The Lanyard,” which was originally published in Five Points volume 7.1. The poem can be found right here on the Billy Collins website. But for those of you who’d like a taste of it right now, here’s “The Lanyard” in its entirety:

The other day I was ricocheting slowly
off the blue walls of this room,
moving as if underwater from typewriter to piano,
from bookshelf to an envelope lying on the floor,
when I found myself in the L section of the dictionary
where my eyes fell upon the word lanyard.

No cookie nibbled by a French novelist
could send one into the past more suddenly—
a past where I sat at a workbench at a camp
by a deep Adirondack lake
learning how to braid long thin plastic strips
into a lanyard, a gift for my mother.

I had never seen anyone use a lanyard
or wear one, if that’s what you did with them,
but that did not keep me from crossing
strand over strand again and again
until I had made a boxy
red and white lanyard for my mother.

She gave me life and milk from her breasts,
and I gave her a lanyard.
She nursed me in many a sick room,
lifted spoons of medicine to my lips,
laid cold face-cloths on my forehead,
and then led me out into the airy light

and taught me to walk and swim,
and I, in turn, presented her with a lanyard.
Here are thousands of meals, she said,
and here is clothing and a good education.
And here is your lanyard, I replied,
which I made with a little help from a counselor.

Here is a breathing body and a beating heart,
strong legs, bones and teeth,
and two clear eyes to read the world, she whispered,
and here, I said, is the lanyard I made at camp.
And here, I wish to say to her now,
is a smaller gift—not the worn truth

that you can never repay your mother,
but the rueful admission that when she took
the two-tone lanyard from my hand,
I was as sure as a boy could be
that this useless, worthless thing I wove
out of boredom would be enough to make us even.

If you liked that poem, then be sure to pick up Five Points volume 14.2, featuring the new Billy Collins poem “To My Favorite 17-Year-Old American High School Girl.” Order a copy here!