Following “Instructions to the Coast” 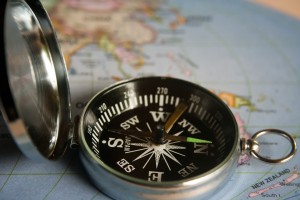 A wonderful poem dense with imagery, “Instructions to the Coast,” first published in Five Points Vol. 15, No. 1&2, by Kevin Cantwell is a piece that captures the reader in a nighttime journey across coastal Florida.

The poem is structured around a set of landmark-based directions. Lefts and rights at liquor stores, churches, and timber yards give a local’s voice to the narrator.

As I read, I found myself recalling memories of a recent train ride and a trip to Florida many years ago, two totally separate events, sewn together in my mind by the words on the page. I thought of my view from the train seat, watching “Bible towns no more than coal and timber yards” flash past the window, seeing them fade into darkness as soon as they came, illuminated only by “the helpless gaze of one train so slow it trembles in the dark.” I thought of walking on the beach at night, listening to the soft beating of the “unmarked waters” and “black tidal sloughs” described in Cantwell’s poem.

The imagery in Cantwell’s poem is the piece’s most striking feature, and one that had me reading and re-reading it to recreate moments from a train ride and memories from a night in Florida long, long ago.

Instructions to the Coast

The St. Marks, the Sopchoppy,

and these that remain unmarked

you will have to cross at night—.

Turn left at the liquor store

they have made a church. That’s south.

on the window, will lean, fall

across the road when the lights

are on, though that place is shut.

Had you gone past your turn,

You would have found Sumatra

no more than coal and timber yards

lit at night by the helpless gaze

of one train so slow it trembles

in the dark. Soon, you will want signs.

Turn left when this road ends. That

is west—but if it is night, and you

again, the constellations are wrong.

Drive on – though the dashboard

and this spur becomes crushed shell

stopped short of the river,

deep sand where many have wept,

argued with the stars, yet circled

to find another place to cross.