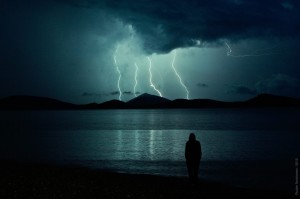 Each spring one of the first rhymes my mother taught me—the classic, “April showers bring May flowers” runs through my mind. If you’ve lived east of the Mississippi you know these “showers” bring down powerlines, rising creeks, and tornado sirens wailing over churning clouds. My mother would try to calm me during these turbulent storms by saying things such as, “God’s goin’ bowlin’ honey,” or “That’s just the devil beatin’ his wife,” to explain away the rolling thunder.

In “Storm Catechism,” first published in Five Points Vol. 12, No. 3, Kim Addonizio uses mythology to explain the storms, turning the unpredictable nature of storms into the whims of the gods. The storm is personified by “laughter in that thunder crack” and “Zeus knocking over his glass, spilling lightning into a tree.” The fickle nature of the gods are evident through apathy towards consequences of their actions, to them it makes little difference if damage is caused to humans or objects.

Addonizio continues the poem by switching to focus on the “just-boiled pasta,” or the humans in her metaphor. This is where her use of catechism, a series of fixed questions, answers, or precepts used for instruction in other situations, is utilized. “Where does the macaroni come from? Where does matter?” is answered with “You only crawled from the drain a few millennia ago, after inventing legs for yourself” making the point that humans are relatively new to the world, but these gods, these storms, have existed long before us.

As with any Addonizio poem, the beauty of her work is the rich succinct lines that evoke tangible imagery. Through her words we are taken to the kitchen of the gods and made to understand that fear of storms we carry with us from childhood.

The gods are rinsing their just-boiled pasta
in a colander, which is why
it is humid and fitfully raining
down here in the steel sink of mortal life.
Sometimes you can smell the truffle oil
and hear the ambrosia being knocked back,
sometimes you catch a drift
of laughter in that thunder crack: Zeus
knocking over his glass, spilling lightning
into a tree. The tree shears away from itself
and falls on a car, killing a high school girl.
Or maybe it just crashes down
on a few trash cans, and the next day
gets cut up and hauled away by the city.
Either way, hilarity. The gods are infinitely perfect
as is their divine mac and cheese.
Where does macaroni come from? Where does matter?
Why does the cat act autistic when you call her,
then bat a moth around for an hour, watching intently
as it drags its wings over the area rug?
The gods were here first, and they’re bigger.
They always were, and always will be
living it up in their father’s mansion.
You only crawled from the drain
a few millennia ago,
after inventing legs for yourself
so you could stand, inventing fists
in order to raise them and curse the heavens.
Do the gods see us?
Will the waters be rising soon?
The waters will be rising soon.
Find someone or something to cling to.