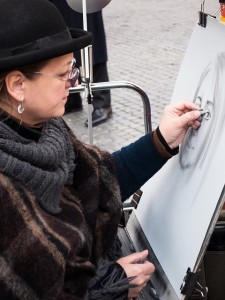 Today you can do almost anything on the internet—video chat with a friend who recently moved to Bangkok for work, discover the meaning of trap and its diminutives on Urban Dictionary, hell, you can even date online.  Facebook alone allows you to poke that cutie from Econ class, react aghast to a post on Donald Trump, and live stream videos of yourself jamming in pajamas or at an epic concert. In this digital age, they say you can be anyone you want to be. Profile pictures, bios, and statuses comprise a digital self whether you choose to make it an accurate depiction of yourself or the person you wish to be. But that’s just it –a depiction. A caricature. No computer, app, or robot can embody you. You can’t even communicate all that is you because something will always be left unsaid.

In Kate Daniels’s poem “When I Was the Muse,” first published in Five Points Vol. 12, No. 2, the narrator searches for her inner self through the gaze of others. In an attempt to overcome her “bourgeois insecurities,” she poses nude on a “plywood box […] above/ the clutch of paint-stained easels” and the investigative gaze of student artists. She “describe[s] the privilege of walking among/ A museum of strangers’ images devoted to oneself” and peruses the humorous inaccuracies of the characters. The images draw her “into the darkroom of [her] mind’s own eye” where she sees herself as an “unsmiling creature with a fear-tinged face.” Much like how modern success is often gaged by the number YouTube views, friend requests, and likes, the narrator is unable to see “the self [she]’d always felt inside but never known” until witnessing the reactionary paintings of her body. Yet this inner self is “trying to get out,” “fighting/ with whip-like straps of something black.” The sanctuary of her mind is one she cannot escape. No painting, sketch, or sculpture can embody who she is just as no Facebook, EHarmony, or LinkedIn account can embody you because one’s essence can never leave the confines of the mind.

They saying was wrong all along. You cannot be anyone you want to be because you are inescapable.

When I Was the Muse

When the painter said, OK, you guys,
take off your clothes! I startled at the plural,
assuming I’d been engaged to model by myself.
But then the dark-skinned god I knew as Aaron
from my Econ class unzipped his jeans,
and dropped them, grinning, on the floor.
So I did, too, and clambered up beside him
on the plywood box that elevated us above
the clutch of paint-stained easels. Thoughtfully,
the students posed our naked bodies. Someone fluffed
the crispy hair between my legs into a dark brown
bristling fan. And someone pinched the sides
of Aaron’s face to pinken up his cheeks.
Privately, I installed myself inside that mental space
where I had hidden as a child when the world
could be aborted no other way . . .

It was part of my plan to walk unclothed
among the portraits my unclad body
had provoked. So when we broke
for lunch, the students lunging in a herd
out back to smoke, I did. If you had asked me
then why I modeled, I’d have said,
to overcome my bourgeois insecurities,
to combat my fear of what might happen
if I showed myself completely naked
to someone else. But if you asked me now?
I’d describe the privilege of walking among
a museum of strangers’ images devoted to oneself,
and tell you what a privilege it was to see myself
the varied ways that others did.

Some silly fellow had painted nipples on me the size
and shape of frying eggs. Another jokester
had shrunk them down as small as M&Ms.
But someone serious and sad had shared a vision
of my head as a clotted orb of hair and mouth,
and brushed in underneath, a body headless
as the horseman in the myth. Then I seemed
to walk into the darkroom of my mind’s own eye
and saw the self I’d always felt inside but never known:
a complicated, unsmiling creature with a fear-tinged face.
Around her the aura of something golden was fighting
with whip-like straps of something black. She was staring
straight into the future, trying to get out, trying
to conceal her fear, completely unaware
of how it glistened and glowed, and of how
irresistible it was for the artist to spread it
across the canvas so that everyone could see.