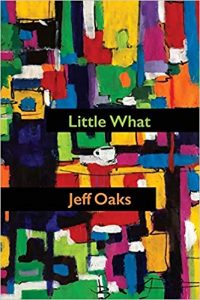 The poems in Jeff Oaks’ Little What are masterfully hearty and inhabited. Memory, rising and falling, can be very tricky stuff. In the hands of one with scant talent, it can lead to writing that only aspires to a single dimensional narrative thread of who was cruel to whom? But masterful writers know that one uses memories; one does not allow oneself to be used by memories.The past can be one of many keys to poetic koanary. Little What is a philosophical inquiry into phenomenology and mystery.

In the poems of Little What, there are observations of caterpillar tents being burned out of the limbs of apple trees, wordless sparrows removing seeds “with the cunning of jewelers,” nervous dogs awaiting hopeful rescue via adoption, heart-thumping youthful sexual initiation, and an “insistence which the worm learns / to avoid, the wasp to structure, the child / to shape all day into castles, his face / to the ocean heaving up discarded armors.”

Through all of this, a woodpecker is pounding his skull against a wall.
“Maybe the guy next door died or something.” Things happen in the night.
Things happen in the day. And a trail of mouse droppings sends the poet
into a meditation (“the midden I’d become”) about being “in the dim light”
in the middle of life.

There are two gay brothers, yelling matches with an able father, a surviving mother; walks along a river and a routine life with a black Labrador Retriever. There is also an image of love birds building a nest and singing; tenderness risked. Can one forgive the devourer for the serenity of love and affection?

Silences and invisibilities give way to moons, bird’s nests, honey in the mouth…. and honey for the devouring reader or listener.