Home » Blog » “Somehow we got out of there alive / though we didn’t quite return:” On Kiki Petrosino’s WITCH WIFE 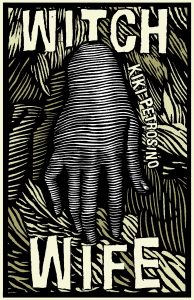 Kiki Petrosino’s third collection, Witch Wife, begins with the self-reflexive invocation, “Self-Portrait.” This poem ranges its language from the opening line’s keening question, “Little gal, who knit thee?” to the polyglossic use of French, to the final lines in which the disturbing term “long pig” is repeated. Employing intense, couplet end-rhyme and refrain, as well as archaisms such as “thee” and “thou,” this opening poem performs as incantation, casting the spell of Witch Wife: sonically complex, formally taut, and equally unsettling and mesmerizing.

The body looms large in Witch Wife— looms as a spectre and a stranger. This undergirding sense of the body as a thing not to be trusted or wholly one’s own is played out through the repeated motif of doubling. “New South,” a poem early in the collection displays Petrosino’s ability to cascade language, history and myth— an effect that could be cacophonous argument of voices, but instead is crafted as a choir:

am born
light girl, light girl
each step blessed but slant
born in procession
already my mother, her mother
the same her mother, then
her mother the same
marching by night
under southern pines
or a dream of pines
on the night road
my feet grown strange

The sense of doubling throughout is a particularly apt canvas for Petrosino’s formal dextrerity. The poems of Witch Wife range from prose poems to tight, end-rhymed forms, but it is the way in which these poems weave their formal concerns together, from the poem’s formal shape on the page to the level of the line and individual sonic unit. For example, in “Elegy” the couplets are bolstered in their duality with the use of caesura to create half-lines and those half-lines are echoed in aural repetitions such as ‘bleat & blister.”

While it is the poems that animate Witch Wife’s brutal lyricism and mysticism, it is worth noting that the hardcover edition, with its moss green interior and woodcut section division illustrations are a truly gorgeous contribution to the book’s grimoire feel. And though the main thrust of “Witch Wife” is a disturbing and numinous sense of incantation, there are moments of levity throughout the collection that complicate the book’s texture. The poems “Whole 30” and “Thigh Gap” are paired together and make for an acerbic and hilarious interlude. “Whole 30” takes on the popular “clean-eating” diet but maintains Witch Wife’s hallmark anaphoric repetitions and incantatory echoing, with a result both humorous and deeply cutting:

But it gets worse
after a winter of gluttony & grief.

I’ve shown up for meatballs. For lemons
whipped to weeping. Now I land my balloon
for the specific kind of ugly

There is no moment of Witch Wife that slacks— Petrosino revels in the crafting of sculptural cats-cradle like poems: strange and beautiful, morbid and musical, Witch Wife confirms Petrosino as both magician and master, and certainly one of America’s most fascinating contemporary poets.

Read poems from Witch Wife at PEN Poetry Series, The LA Review of Books, and Dusie.