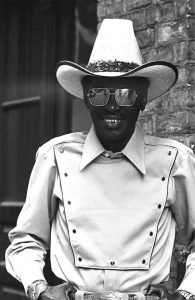 In the Vol. 18, no. 2 issue of Five Points,  Kirk West recalls the blues scene in Chicago during the late 60s in his piece, “Blues Photos.” West details the past in his writing and his photos, and he tells a short narrative of his own uncertainty in the face of blues legends. West writes, “I moved to Chicago in ’68 from a little Iowa farm town, because I’d heard Paul Butterfield on the radio…I knew that Butterfield was in Chicago, and that’s where I wanted to be.” What inspires me about West’s writing in this segment is his courage to uproot and move from a small town into a large city. His move to Chicago was not based in his being offered a job or some other external reason. He moved into Chicago because he wanted to. He was going where the music was good, and he brought his 35mm with him. “I got better with a camera. When I first got to Chicago I was a kid with a 35mm; I didn’t really fancy myself a photographer…And being a naive little farm boy , I didn’t have an agenda. I got taken advantage of three or four times. But I learned my way.” He obviously had disadvantages being new to the city; yet the benefit of his courage far outweighed the consequences.

West did not photograph blues exclusively. In fact, he says, “I figured out a way to make a living shooting Rock and Roll (if you are capitalizing these forms, should Blues be capitalized?) and Country musicians. So I was making good money doing that and kind of giving away the blues photography…” However, in the photography West captures, the blues seem to be the most impactful and long-lasting. West suggests that blues were a rather underground and under-appreciated genre of music. “The money was in the Country and Rock and Roll photography, so fewer people were out documenting the blues.” This provided West the opportunity to document something that had gone relatively undocumented.  “I was around Muddy, for example, but I was in awe of Muddy. I’d go to these teeny joints, like downstairs at the Kingston Mines where the dressing rooms were just a cellar.” West arrived to the blues scene as an  outsider coming from out of town. This caused him to be unsure of himself and the use of his camera. However, given the underground and undocumented nature of the blues scene, an inexperienced and novice photographer was necessary. His talent can be seen in the photographs he took. (Connect these two sentences? refer to specific photos here as well?) They document moments (connect these 2 sentences?) His photos lack preparation and poses. In these underground blues venues, West documented the reality of that music scene without pausing to give his subjects time to prepare. His photos portray real human life at the time and place. They are candid. 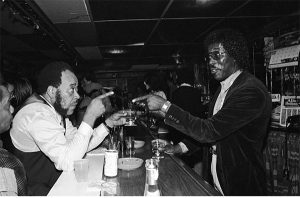 My favorite of the photos shows two men on either side of a bar full of people. They are pointing to one another with one hand and holding drinks in the other. West was snapping photos of his own kind–people who were there for the music.

All photos by Kirk West.

Ross McWaters is a student at Georgia State University.