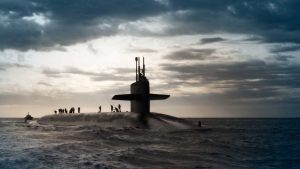 Manual labor, recurring dreams, and difficult coworkers are just some of the things that help me connect with “Freight Dreams” by John Poch. The essay, published in Five Points Vol. 18, No. 2, is all about Poch’s time working on a freight-truck loading dock at one of the huge distribution warehouses south of Atlanta back in the 1990s. I could immediately picture the environment and didn’t need much description. My most recent day job, before quitting in favor of going to college full-time, was in technical support at a company that makes high-speed industrial rollup doors. Several models of these doors are the kinds they use at distribution loading docks and in various warehouses. I have many hours under my belt of lurking, working, and freezing in many different facilities like this across the United States, and when I read about Poch’s loading dock, I am taken back to that environment instantly.

In a “previous life,” I was a submarine sailor, spending months at a time aboard the USS Maine (SSBN-741). My training on the journey to that life included the Navy’s nuclear power training pipeline, which included extensive instruction on radiation and nuclear engineering. Poch made me chuckle with the following section, explaining that he

couldn’t cut it at Georgia Tech where I thought I might become a nuclear engineer. I did learn enough in nuclear physics class that when on the loading dock I found a shipment of cesium in a crate marked RADIOACTIVE, I refused to go into the truck. My supervisor threatened to fire me. I wouldn’t do it, and he gave me another truck to unload. Some other bozo didn’t seem to mind the gamma rays slicing and mutating his cells. I know now that you can’t really study nuclear engineering and work on a loading dock in the evenings. (21–22)

While I was in the Navy, I started to develop a thicker skin because the older and more salty guys I worked with joked around quite a bit. Most of the jokes were raunchy in nature, and there are lot of sexual jokes told by submariners. Poch wasn’t used to all the joking, so some of it seemed threatening. If someone you don’t know very well jokes that they are going to attack you, it is difficult to tell whether they are joking or if you should seriously watch your back. After I got out of the Navy, I realized how thick my skin had gotten, and for several years after, I had to hold my tongue when tempted to blurt out an inappropriate joke or insult.

Like Poch’s waking to dreams about the loading dock years later, I still have dreams about being in the Navy. Being away from my wife and out of touch with everyone else for three months at a time on patrol was difficult, so dreaming that I’m back there with no end in sight is pretty nerve-racking. It is better, though, than the recurring dream I had in childhood, where I saw my immediate family members in the windows of an old house as I stood outside on the sidewalk. They—my parents, brother, and sister—laughed at my lagging behind before disappearing into the darkness of the old house. By the time I got to the front door and entryway, they had all disappeared into the shadows, and I could not find any of them (though I could hear their giggling). My recurring dream is not the same as John Poch’s, of course, but for some reason reading about his dreams of being alone in the warehouse with nobody helping him reminded me of my being alone with no family in a dark, empty house or on a submarine at sea.

Mark McGovern is a senior at Georgia State University working toward a bachelor’s degree in English with a concentration in Rhetoric & Composition. He is a writer seeking a professional home upon graduating in May 2019.