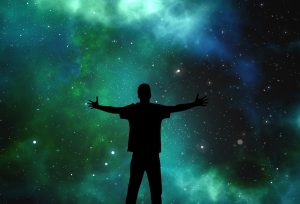 The universe has a funny way of giving us exactly what we ask for and making us regret it just as soon as we get it. Like in the movies, when the protagonist stumbles upon a dusty old lamp in the family attic, or in the back of an antique shop, and they find themselves in the presence of a Magic Genie telling them that they have three wishes. And we all know how that goes, well, all of us besides the narrator in Geoff Bouvier’s “Cosmic Joke,” first published in Five Points Volume 17, number 3. It goes like this: you make your first wish to the Genie, asking for, oh I don’t know, a million dollars. Then, the Genie grants your wish by stealing every dollar from every impoverished family in the country—gaining you your precious fortune. And so, because you weren’t specific enough with your first wish, you have no choice but to use your last two wishes to try to undo the first one.

Bouvier’s narrator may not have a Genie in a lamp, but he does have the power of the cosmos on his side when he encounters “the most beautiful face [he’d] ever seen” and he so desperately wishes to “. . . see that face orgasmic . . . see that face orgasmic . .  see that face orgasmic . .  see that face orgasmic.” Upon reading those lines for the first time, I can’t lie, I was taken aback. I was ready to dismiss the piece entirely—why would I want to read anything about how much one person wants to sleep with another? But once I read the paragraph again, I understood. The narrator doesn’t want to “see that face orgasmic” for his own sexual pleasure; what he wants is to see that already beautiful and perfect face in a state of utter vulnerability because that’s when its beauty would be at its peak. That’s when “the most beautiful face” would transform into a marvel of the universe. I understand this from the language Bouvier uses when describing the person with the gorgeous face—it looked “ecstatic,” the narrator wanted to see the planes and lines of their face “joyously braced”—the language is so electric that there is no way that this is only a shallow request from a salacious mind. The language really adds a hint of sweetness to the typical primal connotation associated with the word “orgasmic.”

Moving on in the narrative, the narrator begins to see the person behind the face, and they develop a friendship. I truly appreciate the honesty that this story delivers. It’s not, “I met this person and their personality was so great that their looks were just icing on the cake.” It’s a much more realistic: “I met this ridiculously attractive person and as it turns out, their personally isn’t that bad either.” The protagonist of “Cosmic Joke” doesn’t try to appear lily-white—he owns his “inappropriate thought” from beginning to end.

In the third paragraph, the narrator explains how he saw his friend before they went on stage to perform in a play. Apparently, the beautiful-faced friend is dressed in drag for the performance because he plays a member of, what Bouvier refers to as, “the opposite sex.” Once again Bouvier dances with language to illustrate the narrator’s feelings when he describes the makeup and accessories that the friend is dressed in as “trappings of the opposite sex.” To refer to the things that make the friend appear to be another gender as “trappings,” the narrator is expressing that he he does not like how his friend looks at the moment. The natural “planes and lines” of the friend’s face are trapped in a mask of the part the friend must play. The narrator even directly states, “That face was interesting, but nowhere near as beautiful. . . .” And that face was the face that he got to see orgasmic.

Bouvier’s lacing of language and play to cosmic irony make “Cosmic Joke” a comical and noteworthy work of flash fiction, and I thoroughly enjoyed my time with the piece.

Jordyn Jackson is currently pursuing a degree in English with a concentration in Creative Writing from Georgia State University and aspires to become an accomplished author.