Home » Blog » Connecting with Ha Jin’s “In the Kindergarten” 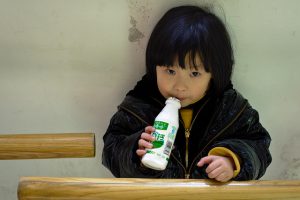 Deception is a resource learned at an early age for children, a universal skill that is a natural part of our lives growing up. As infants, we begin with false crying, and research suggests that by the age of five children have become successful with the ability to lie. There are many influential factors in our early years, but researchers argue that deceit is learned at home and in our close community. Though we are taught the difference between right and wrong, we observe the actions of those around us and adopt the acts chosen by our instinct to survive.

In Ha Jin’s “In the Kindergarten,” first published in Five Points Vol. 2, No. 3, we explore the innocent naivety of a young girl named Shaona living in rural China during the cultural revolution. Shaona observes the deception of her kindergarten teacher who is a young woman rumored to have divorced her husband after he was jailed for embezzlement. Through the unsuspecting ears of Shaona, we realize that the teacher has had an abortion following the shameful divorce. As a result, the teacher convinces the children to pick purslanes, a traditional herb for postpartum bleeding, giving them the impression that the plants were delicious and they would eat their harvest for dinner:

There wasn’t even a purslane leaf on the table. Every one of her classmates looked upset. Not knowing what to say, some children were noisily stirring the corn glue with spoons. Shaona wanted to cry, but she controlled herself. She remembered seeing her teacher leave for home with the bulging duffel clasped on the carrier of her bicycle. At that moment Shaona had thought the green bag must have contained laundry or something, because it was so full. Now she understood, their teacher took their harvest home.

As the story unfolds, Shaona uses deception not only to gain a beneficial alliance from a bully but also to extract revenge upon her teacher. When her teacher promises the children that they would have purslanes for dinner if they picked them again, Shaona sees through the deception and satisfies her anger with her teacher’s misleading words:

Looking around, she saw nobody near, so she squatted down over the duffel, made sure to conceal her little behind with her skirt, and peed on the purslanes inside the bag. But she dared not empty her bladder altogether; she stopped halfway, got up, and covered the wet purslanes with the dry ones she had gathered.

Going to sleep that night, Shaona believes that she is now a “big girl” after her doubts are confirmed when the children don’t have purslanes for dinner that night. The atmosphere of her adolescent joy that we feel is undermined with the sense that Shaona, much like her teacher, will need the skills of deception to survive when she becomes a woman living in the harsh confines of her society.