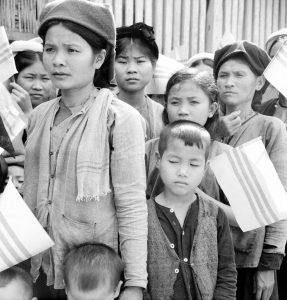 The turbulent firing of machine guns in the heart of Saigon during 1968 terrified my grandmother. The first day of the bloodbath was the only day that she decided to stay at home instead of venturing out into the city’s crowded markets to set up her stand of various household items and imported cosmetics to make a living, or by her words, to avoid ending up with a single grain of rice on the table. After the fall, she hated everything—the fear, the poorness, the thin, bony frames or her and her children, the land of green and orange hues that did nothing for her but keep her husband trapped in the jungle because he fought for the right reasons. Although there were others that were worse off, she herself suffered for seven years. However, she clung to hope that her husband would return home, and he did. It was a tear-filled reunion, but she had wondered if they, with kids who barely remembered their presently haggard father, could have been more at peace if they had taken the chance to cross the ocean before he was honorably imprisoned. They were finally granted a pass to America in 1993.

In “Substitutes” by Viet Dinh, first published in Five Points Vol. 11, No. 3, a rambunctious class of sixth-graders in Can Tho, Vietnam, with poor parents, who cannot afford the option of sailing to nearby countries to escape the incoming communism, experience the cycle of impermanent teachers within less than a school year. The first-person plural narration shows the boys’ various reactions to each instructor—disciplined with Mr. Hanh, sweet with Miss Bui, compliant with Mrs. Pham, and rebellious with Mr. Luu. Every one of them disappears, and according to the boys they have most likely sailed down the Mekong River in search of a safer place rather than staying in a country divided. The boys understand that the school of Vinh Xuong is a place where they have nothing to fear and rather than acknowledging their parents’ stress on the importance of education, they see the continuous change of teachers as a fresh start of freedom each time. Then comes in their last instructor, a North Vietnamese soldier, General Khang, who does not dispel their dreams of escape, but encourages it in his propaganda-like speech by urging them to go work laborious jobs with their parents—school for them is useless and unnecessary:

“You are the future of Vietnam. It’s on your shoulders that we will rise. So forget about school. Go help your mothers in the fields. Help your fathers on the fishing boats. Make our people strong.”

Outside, shuffling feet, chatter: other classes had already been let out. General Khang saw us glancing towards the door. “Go on,” he said. “Join your comrades. Make your country proud.”

And with that, we streamed out, our voices mingling with the others. In the yard, soccer games had begun, and we joined in, raising a cloud that settled in our hair, our clothes, our eyes. We walked out of Vinh Xuong dirty, our faces turned up to the sun, basking in freedom. The world opened up before us, and from here, nothing would ever be the same.

After they leave Vinh Xuong, it becomes a reeducation camp for South loyalists and escapees. Someone in their group says they had spotted their first teacher, Mr. Hanh, there. One day, they clamor around the gate, waiting to catch a glimpse of him, but fail to see anyone resembling him. The matter of Mr. Hanh being in the prison camp does not bother them, instead it emphasizes their feel for freedom and they proceed to call the world theirs:

We didn’t understand, but we weren’t afraid. After all this was now our world. It’s good to be free, we told each other—but even so, who amongst us had never dreamt of escape?

Overall, Dinh seems to allude to a concept of freedom not being freedom, especially when a war of significant impact is involved. Throughout the story, the boys have seen hundreds of civilians flood through Can Tho for the chance to escape while they remain behind. Because they cannot go and because their city is nearly deserted, they feel like kings. However, they are not completely free under the new government. Their freedom to an education, to becoming scholars, to gaining a better future gets stripped away immediately when they walk out of Vinh Xuong, yet they do not know it because it is disguised as a promise that any kid forced to go to school would want. It is not said, but can be implied that the fall of Saigon, the fall of the South to the communist North is something that does not disappear without consequences. The memories and experiences of the Vietnam war will follow them into adulthood, just like it will follow those escapees to wherever they go. This war that promised freedom from pain and suffering to all has done the complete opposite. Instead, the Vietnamese all over the globe now are tied to it more than ever.

Sometimes, when I need to remain rooted to my culture, I ask my grandmother to tell me other stories of Vietnam. I ask her of the times after the war to understand the hardships she went through, and then I ask her of the times before to reminisce the lovely moments she had. Then, I realize there is a point at which both intersect. The war, with devastating effects, has ultimately become a part of her culture—a part that allows her to remember those precious moments of peace she had more clearly. “I wouldn’t be here if I didn’t endure the suffering during those years,” she would say. The war is her reminder of her own privilege today and along the way, it has become ingrained as the provider of mine as well.

(Image is a courtesy of Flickr through Creative Commons.)

Linda Tran is an undergraduate student at Georgia State University, majoring in English with a concentration in creative writing, and minoring in Marketing. She is an intern at Five Points for the Spring 2017 semester.