Home » Blog » “I was less dead then:” On JoAnna Novak’s Noirmania

“I was less dead then:” On JoAnna Novak’s Noirmania 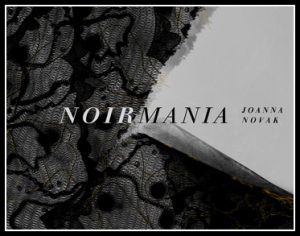 Somewhere between defiance and diary lies JoAnna Novak’s Noirmania. Predominantly composed of a long poem in single-page sections, Novak’s debut poetry collection (she is also the author of the novel, I Must Have You) refuses the abject penance of confession while forthrightly examining hunger and the extremity of self-restriction.

Microsoft Word suggests I change “noirmania” to one of the compulsions it recognizes, either “gourmania” (meaning an obsession for preparing and consuming fine foods) or “oniomania” (meaning an obsessive or uncontrollable urge to buy things.) While neither suggestion is helpful in literal terms, they do point to the obsessions pursued in Norimania— notably hunger, the urge to consume and an obsession with objects, including rendering the body as such a static thing. From the opening lines, Noirmania establishes the body and its instincts as a construct and enclosure: “I’ve heard people describe hunger / as apartmental.” This motif of the body as house or home, as a construct inhabited rather than as a fully embodied identity, runs throughout the long poem. As with the other recursive images—of food, of emptiness—the house that Noirmania lingers in gives us a sense of menace:

Noirmania proceeds through a formal ellipsis and ambiguity that echoes these recursive images. Throughout, Novak’s use of the entire page as a field of experience makes the white space crackle. These visual caesurae both slow and disrupt the reader, creating both space for breath and less natural pauses. Pulling attention to absence and creating an experience of lingering throughout the poem, these formal choices further literally open up Noirmania, giving space for its ambiguities to resonate, if not fully resolve.

While formally disruptive in an immediate sense, Novak utilises this form of the extended field in a repetitive manner, each page resembling the previous. This repetition has a grounding effect, and, along with the stable lyric “I” pulls us through the poem and evokes a diaristic cataloguing of experience. Here, Novak’s ability to turn the lyric into a lance is startling:

Noirmania avoids the penitent position of confession, instead staying in the piercing gaze of self-examination. “Kabinet,” follows the longer poem, functioning somewhere between liner notes and appendix. Moving from diary to dictionary, Novak revels in language’s more playful possibilities, creating a textual “cabinet of curiosities” from “bouncing dice” to “lamp of possibility.” While “Kabinet” allows the reader to leave Noirmania with a little more lightness, this is a delicately brutal collection, as finely wrought lyrically as it is punishing in its examination of obsession.

Read excerpts from Noirmania at Grimoire.

Purchase Noirmania from Inside the Castle here.