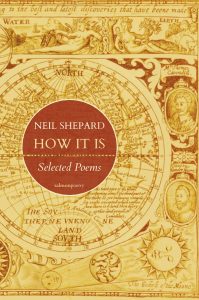 I first encountered Neil Shepard on the page. I remember very much liking the poems. They were firmly inhabited with many of the same Robert Frost qualities that I had found in the poems of James Dickey, Richard Hugo, Betty Adcock, Hayden Carruth, Claudia Emerson, and Robert Wrigley. Throw in a little Ralph Waldo Emerson. A poet in an American landscape aware of the elements that comprised his life: a northeastern landscape of valleys and pastures, changing seasons, and intimate relationships.

I try to believe.
But morning after morning,
the cardinal beats his wings against our bedroom window,
calling a clipped warning, chit chit.
In this I hear my father’s prayers unanswered:
be fruitful and multiply.
The mourning dove sings like wind through wire
and our clothes flap at odds on the line.

In the early poems there are beds to make and ashes to scatter; a stunted ear, a mother’s protection, a brother, and a (first) wife; berry bushes, a woodshed, snowmelt, the sound of water curling.

In that same early work there is also a sense of being a grateful heir to distinctive pedigrees of literary and cultural heritage. A sense of emerging and fixed designs. Some clear, others more mysterious. Some things emerging in ascent; some in decline. Musical notations. The stars sparkle above in constellations. In one poem the speaker notes “a puzzling design” on the bark of a thawed bottom log,

We might even lie together
in the sleep of the long settled,
might feed off the fat of some sweetness
we tasted together in the past,

before snow drops from a bough,
icicles melt clear to extinction,
and whatever new green is coming, comes.

(“Mid-Winter Thaw, Vermont: A Visit from My Wife”)

A “Knowledge of God” is built into Jewish ceremonies and cemeteries; Easters and Good Fridays; churches, Sunday afternoons, blue laws. Those same afternoons are marked with baseball. At night, the thin-walls of a rented duplex gives up the unlocked passion and anger of an amorous quarrel next door…while the poet’s wife works on her thesis and the poet maps out his “tight couplets and slant rhymes.” His eyes move across Shakespeare’s Sonnet 106:

For we, which now behold these present days.
Have eyes to wonder, but lack tongues to praise.”

The poems move out from New England hikes to the larger geographic design of North America and then back to old worlds: Chicago, the Florida Keys, the Atchafalaya basin, New Zealand, the grain fields of Kansas, a shore of Ogunquit, Connecticut, Manhattan, a gorge in Taos, Paris, Provence, Spain, Siena, Corfu, China, and back to the frosts, thaws, apples, and exit ramps of Vermont.

I do not recall the details of our meeting: who introduced us or where we first met. But I did come to meet and know Shepard in the flesh. Our trails do not frequently cross, but occasionally, they do. I reviewed two of his books: “This Far From the Source” (in Coldfront Magazine, 2008) and (T)Ravel/Un(T)Ravel” (in Fogged Clarity, 2011). Selections from both books, books I very much like, are included in this collection. It is worth repeating, Shepard is not a jangly voice of experimentation; he is not the privileged tourist or adventure-driven lone wolf. Nor is he pilgrim or pedant. He is a Vermont-based troubadour, observer, and dependable scribe. More recently, I briefly visited with Neil and met Kate, his wife, at an event celebrating “Vermont Exit Ramps II” at Poets House in New York City. I have never met Anna, his daughter; only read and hear about her.

“How It Is” is an accomplished, mature, joyful Shepard atlas culled from six fine collections.

… I rake the detritus
of the day, fallen sunflowers, paper-thin vines of beans, husks
of corn, drooping stalks of fennel, and begin the perfumed burn.
Once in the intricate web of gods, Prometheus was caught,
his liver plucked for his forethought, his fire-theft. I watch the flames
wither what’s left of withering, watch the next flames-to-be, fall
leaves, flame in the trees. Demeter frets. Persephone waves
and turns away. The maples convert their sugar, flame and flame.

RELATED POSTS:
• “Somehow we got out of there alive / though we didn’t quite return:” On Kiki Petrosino’s WITCH WIFE
• In His Own Words: The Original Poetry of Rumi Translation Sensation Coleman Barks
• Berwyn Moore to Receive the James Dickey Prize for Poetry
• Mary Oliver’s Poem Selected to Appear in Best American Poetry 2012

RELATED POSTS:
• “Somehow we got out of there alive / though we didn’t quite return:” On Kiki Petrosino’s WITCH WIFE
• In His Own Words: The Original Poetry of Rumi Translation Sensation Coleman Barks
• Berwyn Moore to Receive the James Dickey Prize for Poetry
• Mary Oliver’s Poem Selected to Appear in Best American Poetry 2012