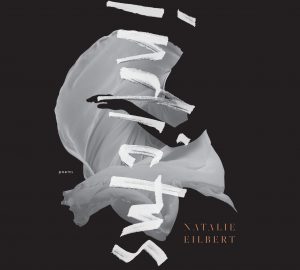 Natalie Eilbert’s second collection, Indictus, is a colossus. Unyielding and reaching, the book takes as its form the long poem—poems that keep going, keep pushing, keep exhuming and exhausting themselves and refuse to stop. The long poem, whatever definition of length we may designate, insists on taking up space and being heard.

Composed of three long movements and an introductory poem, Indictus takes this form of endurance and insistence and turns it into resistance. Eilbert explores gendered trauma and sexual violence—not as individual experience, but as a condition to live under. This book asks, quite literally, what does it mean to write through trauma? Indictus takes this casual piece of language and really puts pressure on it—taking apart the over-used phrasing to bear down on trauma parsed as an object / lived state that the body interacts with. For Eilbert, it is not just the message but the medium of this violence that needs to be interrogated.

The book’s opening poem, “To Read Poems Is to Follow Another Line to the Afterlife. To Write Them Is to Wed Life with Afterlife,” announces: “Let me say of language that it is my currency and performs best when it is stripped of decorum.” Decorum is not something you can accuse these poems of—instead they are wild in their range of language, full of bodily fluids, and ready to make the reader uncomfortable. Furthermore, this poem explicitly locates not only the book’s language, but its agenda:

I take these specific men who saw no mind, who lacquered my body with the possessive, giving me only the failure, sentencing my life to verb—I take these men and I form them into the wound of a line.

The prose-like long lines at work here, and the essayistic sense of drilling toward meaning, permeate Indictus. These are poems designed to take your breath away—to challenge a reader to physically endure until the end of the line— and designed, too, as a whole book. Eilbert’s language and syntax is richly textured, an experience heightened by the awareness of the page.

This awareness knits with the book’s metapoetic trajectory—one could almost place Indictus as an ars poetica. The first long poem, “Man Hole” turns and turns on this titular image—conjuring waste, abjection, and orifice:

exist in the seen world. A body can disappear and become

subsumed by a space, so the body is nothing but an act

of spatial negation. My cunt is a star, its darkness pressed to the floor

to temporarily light me, to lighten.

Later in this poem, the idea of body is pressured further, taking the notion of “body as text” under Eilbert’s microscopic attention to language:

My life is a sob story.

I tug out the thread.

I cling to the fabrics. I rip down all the curtains.

Such is my hypotaxis

Hypotaxis being the grammatical construction of subordinating one clause to another. The conflation of body and text is not a blurring, but a careful consideration to be reflected on. Repeatedly, Indictus returns to the opening question of how to write trauma, how to write gendered violence. What keeps Indictus firmly within the realm of the essay and its cousin form, the long poem, as opposed to a manifesto is Eilbert’s continued interrogation—she keeps asking and examining, rather than declaring how memory, violence and the body should function.

Eilbert often brings other writers into these poems—further texturing her language, and pointing, in a metapoetic fashion, to the construction of the text. Eilbert’s focus on language as a trap weaves further nuance into the book’s examination of rape culture: taking us to the discomfort of being complicit while drowning in the gorgeously wild syntax and gleaming language.