Home » Blog » Connecting with Howard Wright’s “Something for Nothing”

Connecting with Howard Wright’s “Something for Nothing” 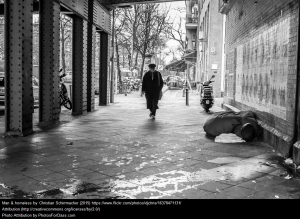 Living within the sprawling concrete jungle of Atlanta, one cannot help but be faced daily with the ugly side effects of rapid urbanization: the sidewalks littered with empty pizza boxes and spent Styrofoam cups, the endless cacophony of sirens and irritated car horns, the numerous men and women who make homes out of benches and business doorways, disenfranchised and ignored. Despite the trees and parkland that attempt to make the city feel greener, and the numerous ordinances aiming to hide rather than help the homeless population, many cannot help but feel weighed down by the ugly side of urban living. In “Something for Nothing,” a poem from  the Volume 13, number 2 issue of Five Points, Howard Wright meditates heavily on this less desirable side of urbanity: the forgotten, the neglected, the almost, and the decayed.

Wright opens the poem with “Neatly sidestepping the Big Issue,” a print publication which operates on a business model of selling copies to homeless or poor individuals and allowing them to up-sell them, keeping what they earn—the poem begins, then, by both acknowledging and ignoring a homeless person, as people often do in urban environments. He goes on in this stanza to describe “the cathedral,” which, “glows Unfinished Romanesque worshipped/ by cars prostrate at its dirty feet . . .” evoking images of filth, of crowded streets.

Later, he describes a youth offering “his dame” a coat-hanger “like a floral skeleton”—as if there were no flowers left there, and coat-hangers were considered suitable replicas. But the girl does not accept it, for she is “distracted by a sudden/discrepancy in the blue dome: a bleached cloud,/ . . . hovering above/chimney-lips and slate-blacks, and, further out, the marsh/ too deep to build on, drive on, or dig as graves.”  This marsh is in some ways as desolate as the city in which the girl observes from; it is a no-man’s land, a useless swamp, “only hazel stumps and blackened willow fretted over/ by pylons. . . .” With no developmental value, the marsh is bordered in, loomed over, by great pylons.

Wright’s poem closes with the forgotten refuse of some city residents: “an autographed football . . . like an extra in some kitchen-sink drama,” and a “smiling audio tape” which “spills its yards of knotted guts word for shiny word.” Though Wright isn’t writing about Atlanta in this piece, there are many parallels between his city and mine— a lack of adequate housing for all, a feeling of constant uncleanliness, of having no clean air—as I imagine is the case with many urban spaces. This is what makes the poem feel much more global: pollution, crowding, displacement, and gentrification affect cities of all varieties, in all places. In the same way, by illuminating these byproducts of urban growth, the poem makes these issues feel all the more necessary to rectify.

Alec Prevett is a poet and short fiction writer. He will begin the pursuit of his MFA in fiction writing in the fall of 2018 at GSU. His work has appeared in or is forthcoming from formercactus, Door is a Jar, Riggwelter Press, and other wonderful places. He lives with a chubby calico cat named Patches. You can find him online at alecprevett.com.