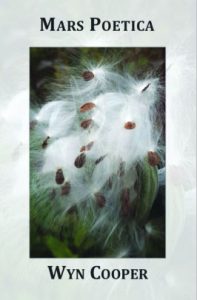 Mars Poetica explores both the macro and micro issues of contemporary life. The broad scope of this collection encompasses movies, fashion choices, gun violence and the intimacies of marriage with the same curiosity and compassion. These concise, crisp poems are full of wit, as in “The Next New Thing:”

What’s in the air for fall,
charity or schadenfreude,
a toned-down boho look?
Please know I’m going
insane with desire
for the next new thing,
style that won’t come back

Cooper often utilizes this wit and irreverence to approach more serious and painful ideas. In this way, humor becomes both a coping mechanism and a formal mechanism, as with the opening lines of “How Silent the Tree” written in memory of poet Liam Rector who died by suicide in 2007: “How the hell are you, I want / to ask but can’t—you’re dead.”

Formally playful, the poems in this new collection range from prose poems (“Plaza de Toros”) to almost concrete forms (“Parade.”) Both as formal experiments and interrogations into contemporary life, Cooper’s poems question the role of language, whittling it down to its most succinct manifestation.

“Plaza de Toros,” originally published in Five Points, was republished on the Poetry Daily website and can be read here. Other poems from the collection can be found online in these places:

More information, including where to purchase, about Mars Poetica can be found at White Pine Press, here. For more about Wyn Cooper, see his website, here.