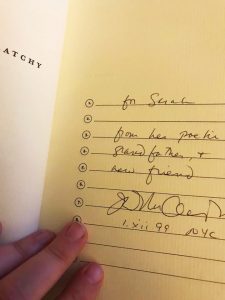 When I studied in the graduate writing program at Columbia (the Fall of 1992), J.D. (Sandy) McClatchy was my prosody teacher and—at times—my workshop leader . . . and eventually, after much default, he became my most dependable mentor. I had already encountered his poems. I had read an essay he had written on the poetry of Ben Belitt in the Summer 1990 Salmagundi. He spoke to us eloquently—even passionately—about the poetry of Sappho, Virgil, Edna St. Vincent Millay, Ann Sexton, Anthony Hecht, W.S. Merwin, James Merrill, Richard Howard. I revered him as a poet, scholar, and critic; or, as Auden termed: a maker, a knower, and a judge.

Upon graduation from Columbia, I was set up to continue my mentor-mentee relationship (to provide letters of support or recommendations, to field questions, to resolve aesthetic conflicts in the writing, etc.) after Columbia with William Matthews. Mine might have been the last Columbia thesis Bill Matthews critiqued. He unexpectedly died of a heart attack, November 12, 1997, one day after his fifty-fifth birthday. I was left a bit at sea without a map or star.

Seeing the vacuum and recognizing the need of a younger poet, Sandy having also been my teacher and being familiar with my work . . . approached me and assured me that he was there should I need continued support from someone associated with my studies at Columbia. At that time, I did not completely understand what it meant to be taken “under his wing.” It should not come as a surprise that besides a great poet, Sandy proved to be an understanding, dependable, and outstanding mentor. Much, much, much of the content that I now teach in my classes is directly from Sandy.

After I established myself as a poet and teacher, he supported and published my work in The Yale Review. (He turned down submissions when they were too slight. Once he responded that he liked a poem, but found the ending weaker than the rest of the piece; perhaps I should rethink “the quality of the language” of the ending. I reworked the ending, and he took the poem.) And he was kind and generous to the fledgling poets that I brought around to introduce to him. Sarah Best, a then-19-year-old Gallatin (NYU) poet met him . . . but had forgotten to bring her copy of his book to class. So he signed a bookmark for her in his tight, Jesuit-trained script: “This bookmark is Sarah’s and comes with every good wish from the author.” In handing the bookmark to her he said—with the signature wry sparkle in his dark eyes: “Now go home and put in a first-edition by someone like Longfellow or W.H. Auden. . .or Elizabeth Bishop and you’ll really have something!” Later, in a just released paperback copy of his “Ten Commandments” (a collection organized around the “iron laws [we were raised on] and the way the heart is shaped by them. . . , a cabinet of moral curiosities, a collage of emotional astonishments”), he signed her book: “from your poetic grandfather, and new friend. . . . Dec. 1999.” Almost two decades later, after her own false starts and circuitous corrections in life, Sarah—having continued to write—submitted poems to him . . . and one, “Tinder,” was subsequently published just this past January in The Yale Review. She wrote to me that she will miss “his intense clarity, his vigor . . . and his tenderness”—Sandy’s legacy of literary friendliness.

He died last Tuesday night. The days after have been a flurry of electronic correspondence: I shot a message off to Mark Wunderlich, Sally Dawidoff, and Heather Winterer, colleagues at Columbia. I heard from Susanna Shell Cerrato (a student I taught McClatchy poems to at Fordham), Stephanie Abraitis D’Ostilio (a student I taught prosody and McClatchy poems to at NYU), Nicole Greaves (a colleague and gifted poet from Columbia who is working on a manuscript and who was also in Sandy’s fall 1992 prosody class at Columbia). A former student from Drew. Someone from the Fashion Institute of Technology. Two students from my present class at Gallatin dropped by today just to be sure I was “okay.” Other email exchanges: Rachel Hadas, Peter Covino, Cynthia Hogue, Walter Holland, Sally Ball, Andrea Carter Brown (a fellow student of Wm. Matthews), Megan Sexton, Alan Felsenthal. . . . Will I be going to Marie Ponsot’s birthday celebration tonight? Might I be willing to write something about Sandy as a poet of the body? About AIDS and Cancer? The body as “tyrant”? Just last week Marie was 97. Honestly, I am not sure that I am “okay.” Who will Auden’s OED now pass to? Sandy never got around to signing that other book for me; my loss. I seem a bit shaky. I suppose it is the natural order of things.

In the welter, yesterday, I taught Robinson Jeffers’ concepts: “Harp, Anvil, Oar”—all of it gleaned from Sandy. Study the stars, but learn to sail in the dark.

SCOTT HIGHTOWER is the author of four books of poetry in the U.S. and a bi-lingual collection (Spanish-English) published in Madrid. Tartessos, his second bilingual, is forthcoming, also from Devenir. Hightower’s awards include the 2004 Hayden Carruth Award and a Barnstone Translation Prize. When not teaching at New York University’s Gallatin School of Individualized Study, he sojourns in Spain.

RELATED POSTS:
• Apples and Reading Selecteds
• Announcing George Kalogeris as the Winner of our James Dickey Prize for Poetry
• THE INCLUSIVE TABLE OF THE HUMAN IMAGINATION
• Possible Futures is Going Literary!

RELATED POSTS:
• Apples and Reading Selecteds
• Announcing George Kalogeris as the Winner of our James Dickey Prize for Poetry
• THE INCLUSIVE TABLE OF THE HUMAN IMAGINATION
• Possible Futures is Going Literary!