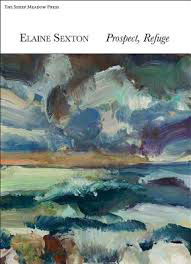 Prospect/Refuge is Elaine Sexton’s third book. It was published from Sheep Meadow Press in 2015. That year I was relaxed in writing reviews, did pen some of my thoughts about the book…. I am just now getting around to pulling the bits and pieces together.

The first poem of the collection introduces a notion of containers: the shell of a walnut, a clean white bin, a bucket of trout, a basket of pears, the map of a face. Also introduced, is a knife (as a tool) and a defensive position; difficulty and ease; and the refuge of ideas. Ahead there will be homes, norms, proprieties, back yards, pockets of time, the limits of neighborhoods and acquaintances, memories, galleries, walled-cities, headsets, stationed satellites.

Each of Sexton’s poems layers into the book. Space is intimate; sometimes real, sometimes imagined. Time (the clock, seasons, weather, memory) also presses into familiar liminalities. Our humanity is on trial, will we risk the intimacy of revealing our deepest fabric? What do we choose to display? What do we choose to reserve and protect? What safety to unfurl do we offer others? In one remarkable poem, the speaker is taking in another woman’s performance art piece. The guard’s presence and cough are not separated out of the piece. The artist—sledge hammer in hand––is escaping from a walled enclosure of her own making:

I thought I knew
art work was work at the time,
but just then my dead mother
entered the room….
[My father] sent her to school to learn
how to mend, to keep house, to cook,
her own mother too poor
and beleaguered to teach
much of anything
but honesty. An honest day’s work.
And she stood there watching
the guard watching me
watching this artist make art,
all of us working at watching
her knock down a wall
she made for herself.

Evidence continues to pile up in the poem. Evidence of how one’s history molds or provokes character, evidence of spent time, spent energies, spent dreams:

Will there ever be an end to refuse?
Garbage. Good garbage, true.
Spent things. Endless, endless evidence.

In the poem refuge, Sexton opens the book to the full metaphor of the collection:

We discovered an unfortified village
la bastide, in France,
built by serfs
as a way to be free
In Occitan espairbarenque
is to live outside
the walls of protection.
Our prospects are our
best weapons.

Prospect/Refuge is artfully divided into four untitled parts; but section II is a single poem (“About You”) and section IV is a manifesto (“Poetry & Smoke: A Manifesto”). Like the poems of sections one, the poems of section three are about deciphering the plains of one’s experiences and one’s landscape. For Sexton, that means navigating the plains of gender and self-possession. In the poem “The Woman at My Back,” Sexton while considering elements in paintings by de Kooning…. weighs glimmers of a former relationship receding:

you
getting smaller and smaller,
like a made-up lover
who doesn’t know how to drive,
who keeps making wrong turns,
trusting flawed instincts

A stunning image. She goes on from there:

to love this one,
that one,
me.
“When someone you love leaves

they never come back,”
the public intellectual
wrote, privately
in her journal.

Is it any better where you are now,
the land and sea
indecipherable,
the plains of abstraction clear?

With the wind of misgivings at her back, Sexton ploughs into her concluding manifesto…. a manifesto which opens to a very full vista of the possibilities of poetry. New poems, reports from new vantages, new possibilities from this discerning and generous poet can only lie ahead!

RELATED POSTS:
• Reflecting on “The Addict’s Mother: Birth Story”
• Announcing George Kalogeris as the Winner of our James Dickey Prize for Poetry
• “Shale performs the offense of memory”: Natalie Eilbert’s INDICTUS
• Behold the Book: Alice Hoffman’s The Rules of Magic

RELATED POSTS:
• Reflecting on “The Addict’s Mother: Birth Story”
• Announcing George Kalogeris as the Winner of our James Dickey Prize for Poetry
• “Shale performs the offense of memory”: Natalie Eilbert’s INDICTUS
• Behold the Book: Alice Hoffman’s The Rules of Magic