Home » Blog » THE INCLUSIVE TABLE OF THE HUMAN IMAGINATION 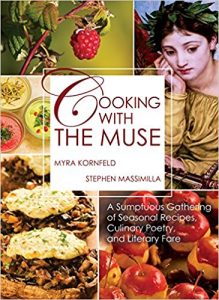 Anyone with a grandmother’s or mother’s cook book overflowing with yellowing newspaper clippings, archaic product recipes, ancient illustrated pamphlets of cooking techniques and presentations knows that bounty and portion give way to culture. Recipes and poems share an incantatory past. Both have an oral and a written cultural valence… which is to say, a literary dimension.

Back in 1991 Raymond Sokolov’s Why We Eat What We Eat built on Auden’s notion that–more than “The Atomic Age”—we are living, perhaps more appropriately, in “The Golden Age of Cuisine.” Sokolov’s book was primarily history—melding the pre- and post- Columbian worlds. In 2009, Anthony Chiffolo and Rayner Hess co-authored and served up their glossy photograph enhanced Cooking With The Bible and in 2010 Cooking with the Movies.

Now we are showered with more plenitude! Three books—each seductive and vertiginous in their own way—are notable additions to the shelf.

COOKING WITH THE MUSE is the most ambitious of the three.

It is a large (492 page), carefully indexed tome offering 150 international recipes, poems, literary essays, culinary and historical notes, and 200 full-color photographs: a feast of words and images. The book is divided into seasons and is easy to follow. “Cook’s Notes” (Kornfeld) and “Poet’s Notes” (Massimilla) salt and pepper the volume. Of eating a plum, Massimilla writes:

to the hard grooved stone

through flesh as dense

as the gallop of blood in the lungs, pulse

within the heart, here under fetlock

and throat-latch of the Horsehead

all thirst and murmur….

DARK AS A HAZEL EYE is a smart regional (Princeton) anthology of poems—not recipes or photographs. Only poems. Its dusky coffee or chocolate brown mat cover activates the tongue. More notable than its cover, the quality of this book’s content is ear winning. The poems are outrageously generous. Nothing amateurish or self-indulgent. The only indulgence is the return to the subject of coffee or chocolate creatively presented in six parsings: Buzz, Craving, Bliss, Bitter, Ritual, Afterlife.

the center of the flower.

you will live long enough to wear me,

a motion of faith. There is this,

and there is more.

Or perhaps another sampling, the flavor of romance lost served up by a different barista:

You always liked it strong and now

you’ve got it at its darkest…

so you clay-pigeon it again and pull! Shoot! A hit!

My heart, I mean, that flat and battered thing

you had and lately thought so little of.

The format of Goettel and Matheson’s FEAST is a combination of the two. It is recipes, and food and drink inspired poems and short pieces: Starters, Sides and Sauces; Cocktails; Mains; Dessert.

Plucking something from the section of “Mains”:

So much is lost between the white flour of my North

and the rich corn of your South, our continent a broken body.

So we raise the dead with photographs. We hold down our fort,

Free and warm within the soft borders of our skin.

When you wake we cry over onions, and laugh. We stir

and steam. We take a bottle of good red wine by the neck.

As always, the good stuff offers us something appealing and nutritious.

SCOTT HIGHTOWER is the author of four books of poetry in the U.S. and a bi-lingual collection (Spanish-English) published in Madrid. Tartessos, his second bilingual, is forthcoming, also from Devenir. Hightower’s awards include the 2004 Hayden Carruth Award and a Barnstone Translation Prize. When not teaching at New York University’s Gallatin School of Individualized Study, he sojourns in Spain.