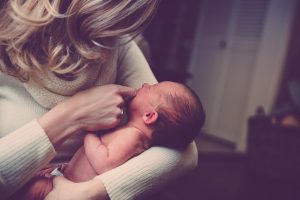 We’ve all been exposed to some sort of addiction, whether it be our own or someone else’s. Either way, it’s one of the hardest things anyone will have to go through in their lifetime, depending on their proximity to the addiction. When we tell the story of an addict’s life, it is mostly focused on them and telling their story; rarely do we focus on others in the situation and consider their experiences with the addicted person. That’s why I was struck by the poem The Addict’s Mother: Birth Story written by Kate Daniels in Vol. 18, No. 2 of Five Points.

The poem begins describing the C-section of a woman who is giving birth to a baby boy:

“She wasn’t watching when they cut him out. C-section, you know. Green drape obscuring the mound of ripened belly they extracted him from.”

Already, we can feel that there is tension in this birth scene, with the mother not being able to see her child as he’s taken out of her, due to the nature of a C-section. While some may see a C-section as “easier” than a natural birth, that’s not fair to say–both are hard–but a C-section leaves a scar, a constant reminder, and requires recovery time.

The next line continues, “He spilled out squalling, already starving. Still stitching her up, they fastened him to her breast so he could feed.”

The words “already starving” is the first allusion to the future addiction this baby would have. We can begin to see, already, the way that his needs quickly take precedence to her own, which is to be expected when you have a newborn child. But it marks the beginning of a lifetime of “feeding” on his mother.

It continues, “There he rooted for the milk, so lustful in his sucking that weeping roses grew from the edges of her nipples. For weeks, they festered there, blooming bloody trails anew each and every time he made a meal of her.”

Daniels continues to allude to the future addiction through the comparison of the baby lusting for his mother’s milk, sucking and biting on her breast so much that she begins to have wounds that last for weeks. This is a direct connection to how addicts can harm those who care for them and love them by draining them emotionally, physically, or financially. When he made a meal of her as a baby, he was sustaining his life, but as an adult, he’s harming her by using her to sustain his own addiction.

The last few lines wrap it up succinctly, “I know what you’re thinking. But he was her child. She had to let him do that to her.”

The poem ends on this guilt that all parents inevitably feel when trying to take care of their child, despite how it affects themselves. Especially in the situation of having an addicted child, parents want to help them any way they know how, but often times it can only do more harm. This poem accurately captures the feelings of an addict’s mother–constantly wanting what is best for their child without any regard to what is best for herself.

Allison McCallum is a senior at Georgia State University majoring in journalism and public relations. She has a passion for writing and helping others and hopes to find a career where she can do both.