Home » Blog » AMY LEMMON: “THE RISK OF MAKING THIS ABOUT ME”

AMY LEMMON: “THE RISK OF MAKING THIS ABOUT ME” 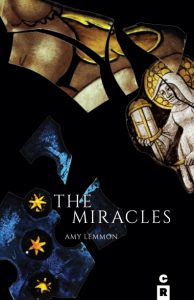 Writing is a socially charged, personal art. It is a direct line from the artist’s mouth to the listener’s ear. Consider Mary and the annunciation of the angel.

Writing poetry and writing reviews have in common that readers are not only hoping to discover an artifact, but they are also hoping to discover a dependable, convincing voice. Writers perfect moving into the quality of language (be the work completely fabricated material or be it the transformation of a life), they equally, continually explore ways of “inhabiting” work. A convincing familiarity can become key. There is hardly a rub between the actual and the metaphoric; such is art. There is always a rub between the testable observation and the bias-based opinion; such is logic and rhetoric. All of these notions swirl even before reaching into Amy Lemmon’s new book of poetry “The Miracles.”

Amy Lemmon is a TERRIFIC poet. We already have her “Fine Motor” and Saint Nobody.” In her new book, Lemmon continues to weigh the Romantic and Ideal against the counter valence of Realism.

“The Miracles” is dedicated to Ms. Lemmon’s two children. From that point on, each reader is on their own. I am familiar enough to read the poems as transformed observations of the melodramas and tragedies of Ms. Lemmon’s actual life. Readers less familiar, may well read the poems as fabricated personaic masks; after all, the book closes with an evocation of Randall Jarrell, a poet who worked in revelations beneath fictive masks. Ms. Lemmon is learned. Here, one finds notes from the mother, the wife, the romantically unattached, the widow, the scholar (Gerard Manly Hopkins, Philip Larkin, and as previously mentioned, Randall Jarrell)…. and through it all…. the Poet.

Some poems are metric––precise and yet appearing effortless. Lemmon always politely capitalizes the beginning letter of each line of those measured for the reader––in recognition that these are musical lines. Besides a measured line, some poems incorporate traditional rhyme; others are blank verse. There are sonnets (different varieties), a villanelle, a sestina; stanzas. A few poems are in free verse.

The mother, the primary wayfarer of the book faces practical responsibilities. As she is romantically un-attached and “partnered” (her ex-husband having abruptly lost his life in a vehicular accident) only to her children, there are amorous insecurities and subsequent challenges. (Her daughter has to deal with genetic disorder and its ensuing challenges.) The poet is an aging…. and hormonal woman. (Her son is a growing teenager, just “shy” of growing into his musician absent father.)

Lemmon’s music is essentially Lutheran and American. There are no crucifixes, rosaries, or paintings of deities with enflamed hearts. Instead, there are painful reflections and transferences of craving, the scent of an unwashed shirt that belonged to the beloved, the dearly departed. In the poems there are roses, valentines, and images of hearts—one particular arresting image of the heart as a “freeze dried prune.”

As it is a book of songs by a wayfaring stranger making her way through the wasteland, thoughtfully and artfully peeling back fears, strengths, insecurities…

The few things that give pleasure to my days and nights.
I am not exceptional,
Staring at the mirror like a fogged effigy,
Unclear how one so young can look like that,
How one life can, after all,
Be so confused, so commonplace, so solitary. (“Another Day”)

I might suggest pairing it with Mark Wunderlich’s “The Earth Avails” or Christopher Patton’s “Curious Masonry: Three Translations from the Anglo-Saxon.”

“The Miracles” is a book for anyone who wants dependable songs about the struggle of our life, the vanity of our progressive awareness, and the temporal nature of this mortal coil.

RELATED POSTS:
• Connecting with Brad Wetherell’s Snafu
• Announcing George Kalogeris as the Winner of our James Dickey Prize for Poetry
• THE INCLUSIVE TABLE OF THE HUMAN IMAGINATION
• Edward Hirsch Reading at GSU on April 2nd, 3:00pm

RELATED POSTS:
• Connecting with Brad Wetherell’s Snafu
• Announcing George Kalogeris as the Winner of our James Dickey Prize for Poetry
• THE INCLUSIVE TABLE OF THE HUMAN IMAGINATION
• Edward Hirsch Reading at GSU on April 2nd, 3:00pm