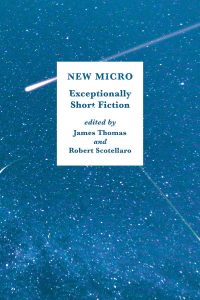 The stories collected in James Thomas and Robert Scotellaro’s stellar new anthology New Micro: Exceptionally Short Fiction (W.W. Norton, 2018) are all 300 words or less, and with few exceptions, such as Amy Hempel’s marvelous fable “The Man in Bogota,” are products of the early aughts or 2010s. The collection includes stories from writers both well-established and emerging and is comprehensive in its inclusion of stories from microfiction’s many subgenres, offering a full picture of the spectrum of microfictive narratives.

Many microfictive stories are image-driven, as the short form allows for the writer to focus on image to develop narrative, and New Micro offers several in this vein, like Theresa Wyatt’s searing 52-word story “Gettysburg, July, 1863.” Wyatt uses the image of melting candles to ruminate on beginnings and endings, dark and light, and the terror of war in her tale of a Civil War soldier who wakes in a cellar to find “a woman leaning over him picking wax from his beard” because “the doctor needed light to amputate in the dark.”

Others are fabulist, like Tania Hershman’s terrific story of infidelity and patriarchy “My Mother Was an Upright Piano,” in which the narrator describes her mother as an “upright piano, spine erect, lid tightly closed, unplayable except by the maestro. My father was not the maestro. My father was the piano tuner; technically expert, he never made her sing;” she wonders if she also should find a maestro or should be satisfied with her own piano tuner, “sharp” and “efficient,” not considering she might be her own instrument.

There are stories as lists, such as Roy Kesey’s “Learning to Count in a Small Town;” directives, such as Stace Budzko’s “How to Set a House on Fire;” love stories; war stories; stories of loneliness; extended metaphors; stories of the political made personal, like Michael Martone’s wry “Dan Quayle Thinking: On Snipe Hunting;” stories of motherhood and fatherhood; and stories of sex, like Nin Andrews’ wonderful companion pieces “The Orgasm Needs a Photo of Herself” and “The Orgasm Thinks You Have Forgotten Her,” in which the orgasm’s “host” wakes with “a memory of all she has lost. All that once shaped the hours around her like a lit and shimmering gown,” implying that pleasure is a commodity both ephemeral and shallow. Like “The Orgasm Thinks You Have Forgotten Her,” the stories here invite multiple reads, each reading reveals a new layer of narrative. And like Andrews’ story, they are all reminders of the hybridity of form, demonstrating the ways that poetry and prose intersect to build emotion, as Josh Russell’s language-driven story “Black Cat” does in its repetition of the word “Remember” to explore the ambivalence of heartbreak, each reiteration compounding the contradictions of love, calling attention to the nature of story and the nature of reading, challenging the notion of character development, of the role of the narrator, of climax and certainly of resolution.

The stories collected in New Micro are stories for our time. These stories eschew closure, evade carefully delineated theme and pointing to signposts of symbol. These are stories not to be teased apart but experienced, stories felt in the body. The body knows that there is no ending, only infinite beginning, the next thread in the narrative extending and complicating the one that came before, as the stories in New Micro remind us again and again.